Come, let Inflight Travel Agency show you a land where mountains seem to touch the sky, glaciers flow right to the sea, and elegance balances perfectly with adventure. Experience the trip of a lifetime with an exceptional range of iconic hotel stays in the midst of stunning wildlife and glorious snow-capped mountain scenery. Inflight Travel will send you on a memorable journey through the heart of the Canadian Rockies, cruise you along Alaska's Inside Passage revealing North America’s last great wilderness where you will be overwhelmed at the blue-green glaciers, endless rain-forests, craggy cliffs, majestic peaks, picturesque fishing villages and breathtaking National Parks. You will see bald eagles soar, whales playfully breaching and grizzly bears ambling along..

Come see the ancient, enormous rivers of ice that sculpted Alaska's mountains. You can get up close to glaciers on cruise tours and day cruises in many areas of Alaska including Glacier Bay, Kenai Fjords and Prince William Sound. These trips offer a wonderful glimpse of coastal Alaska with its dramatic mountain scenery and tidewater glaciers.

Flying is a way of life in Alaska and a trip to Alaska would not be complete without a flight seeing excursion. Get a bird’s eye view of this great land as you circle majestic Mt. McKinley, take a float-plane to a wilderness lodge or land on a glacier in a helicopter.

In Alaska you can explore the wilderness by day and sleep in a warm bed at night. Guided trips and tours take you to a variety of remote - or not so remote — places where you can enjoy almost any outdoor interest. Stay at a back country lodge for fly-fishing and bear watching, or join an expedition to one of Alaska's remote parks forests or refuges. More on USA Here

Inflight Travel Can Take You Here

Canadian cities are progressive and vibrant Toronto, a veritable patchwork of charming neighborhoods, has an idyllic beach side location on the shore of Lake Ontario, while Canada’s capital city, Ottawa, contains a clutch of fantastic museums and the pretty Rideau Canal for ice skating in winter. Montreal’s skyscrapers belie its French heritage, but look closer and you can stumble upon historic, cobbled streets and centuries-old customs. A stone’s throw from the Canadian Rockies, booming Calgary flashes its oil wealth and flaunts its cowboy traditions during the annual boot-stomping Stampede. Chilled-out Vancouver, meanwhile, seems to have it all: mountains, beaches, an incredible downtown park and a cosmopolitan dining scene. And across the Georgia Strait, Vancouver Island is just the tonic if the city life gets too tough.

For something wilder, ski steep chutes in British Columbia, kayak secluded bays with whales in Nova Scotia, capture grizzlies on camera in the Yukon, watch mammoth icebergs drift past the Newfoundland coast, or soar over Niagara Falls by helicopter. Tour vineyards, dig for clams or feel giddy gazing at the Northern Lights. 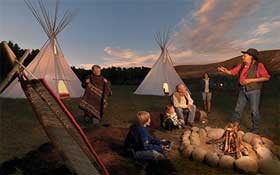 Alberta is undoubtedly one of the most breathtaking places on earth, as vast as it is varied in landscapes and experiences. The rugged beauty of the Canadian Rocky Mountains, turquoise lakes, boreal forests, rushing rivers, rolling grasslands and prairies sets the scene for your authentic adventure
Touch the top of a mountain then soak in natural hot springs. Dust off a dinosaur bone on a dig in the Canadian Badlands. Saddle up and herd cattle on a working ranch. Immerse yourself in all things western at the annual Calgary Stampede. Stay in a fairy-tale alpine castle, rustic back country lodge, or camp out in a tipi. 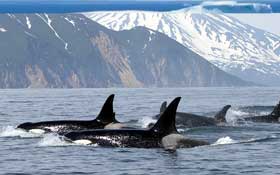 British Columbia welcomes you into adventure. Learn to surf on the relentless Pacific waves of Tofino; swirl-and-sample award-winning local wines in the arid Okanagan Valley. Dine at cosmopolitan seafood restaurants in Vancouver; be awed by wild whale sightings in the remote Haida Gwaii. Carve up un tracked powder in Whistler; immerse yourself in the Gold Rush history of Barkerville. Engage with First Nations cultures at aboriginal heritage sites; spot bears, eagles and elk in pristine coastal rainforests. 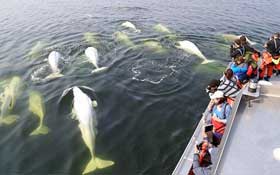 Your unexpected adventure begins in Manitoba. Start in the north where the great polar bears gather along the shores of Hudson Bay. Spend some time on the tundra spotting rare ptarmigans and kayak amongst thousands of friendly singing beluga whales. Cast a line into those cool, clean inland lakes—all 110,000 of them—for hulking lake trout and feisty northern pike or visit cottage country around Lake Winnipeg, only an hour north of one of Canada’s “cultural capitals”. Let the Royal Winnipeg Ballet whirl you into a fantasy land. Groove at the Winnipeg Folk Festival and jig to a fiddle tune at Festival Du Voyageur. 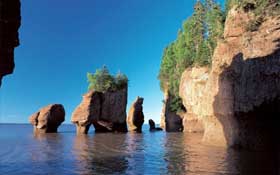 Few places on earth  have nature as  awe-inspiring as New Brunswick.  Visit this special place and be rewarded with magnificent tides, breathtaking coastline and endless adventure. Whale-watching and Bay of Fundy kayaking are only  two of the unique experiences we want to share with you when you visit the highest tides in the world. You'll spot finback whales, humpbacks, playful minkes and maybe even the rare right whale. 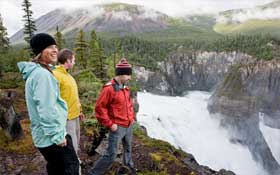 Sprawling across the roof of Canada, the Northwest Territories is a patchwork of tree-less Arctic wilderness and boreal forest where rugged characters have created a unique Northern pioneer culture. Hopscotch by bush plane across a landscape polka-dotted with lakes to canoe, kayak, fish and hike. Raft down the South Nahanni River and hear the roar of Virginia Falls, twice the height of Niagara. Whisk by dogsled to a luxury log lodge or wood-stove-warmed prospector’s tent under the shimmering Northern Lights 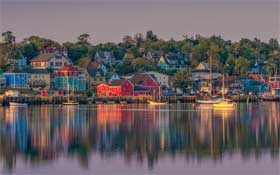 Nova Scotia, it means New Scotland—but you will discover many cultures here. Strong Celtic and Arcadian heritages create your opportunity to tap along with bagpipers, drummers, and fiddlers. Dive into military history at the Halifax Citadel National Historic Site or Fortress of Louisbourg National Historic Site. Dive into the pulse of Halifax’s thriving pub scene in a city famous for one of Canada’s most-loved beers. Eat more fresh lobster and scallops than you ever thought possible, pulled from the Atlantic and the Bay of Fundy, home to the world’s highest tides. 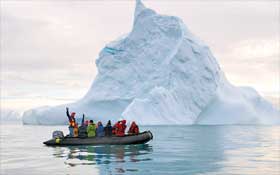 Nunavut is Canada’s Arctic Outback, a vast and pristine landscape of glaciers, icebergs and tundra.  Hike or ski in far northern Sirmilik National Park. Travel across the frozen ocean to the ice floe edge on an Arctic safari to spot beluga whales, narwhal and polar bears beneath the shimmering colours of Northern Lights. Hop a Northwest Passage cruise and learn about Inuit history and heritage while on the lookout for musk ox, walrus and bow head whales. Stay with a welcoming Inuit family in the traditional hamlet of Kimmirut; mush a team of sled dogs and go ice-fishing for delicious catches like Arctic char. 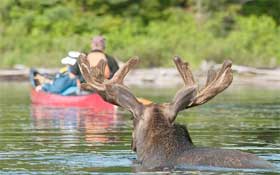 Ontario is a province that offers a diverse range of experiences. Visit world-famous Niagara Falls, then enjoy the culinary bounty in the wine country that surrounds it. With thousands of fresh water lakes and rivers, as well as the St. Lawrence River, Ontario is bordered on the south by four of five Great Lakes - Lake Ontario, Lake Erie, Lake Huron and Lake Superior making it a perfect destination for boating, fishing, camping and more. Those looking for a urban beat head for the bright lights of Toronto and Ottawa - two of Canada's largest cities and the provincial and national capitals 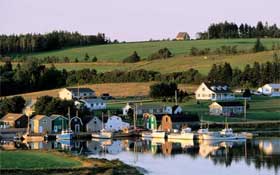 From the moment you step onto Prince Edward Island you'll feel the difference. Life is celebrated at a different pace here. It's a lifestyle as gentle as the rolling green hills that rise up to greet you and as warm as the deep red of its cliffs. Fall in love with the small town charm of an island that is an easy drive and brings the promise of camera worthy pictures around every corner. Soon you'll completely understand what draws so many to the tiny island each year : the people. From the fisherman teaching you the right way to catch your Bluefin Tuna to the lobster suppers at a quaint church as the sun sets, you'll forget you've come just to visit. 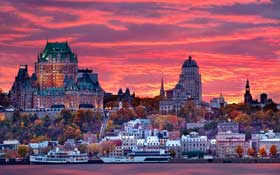 Ride in a horse-drawn carriage, stroll antique alleys, snap to the beat of a jazz festival—and eat, eat, eat. Stroll through Montréal, Québec City, or smaller communities tossing your scarf with the nonchalance of a local. Practice your French phrases—even “bonjour” and “merci” earn you points with the locals. Step back four centuries onto Québec City’s cobblestone streets inside the last standing fortified city walls in North America. Marvel at how Quebec people embrace the seasons—even giving winter its own festival. Discover the astonishing creativity of a culture that spawned Cirque du Soleil and continually innovates in the arts. Food defines much of what is extraordinary about Quebec’s French-Canadian culture. 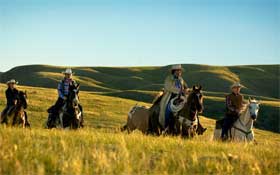 Locals call it the Land of Living Skies and after your first evening staring at the endless expanse of sparkling stars you will nod in agreement. Saskatchewan does everything big. Expect to find open prairie ranches where horses run with abandon with no fences in sight. Launch a canoe or a motorboat in large lakes and long meandering rivers. Cast off to reel in massive freshwater fish or water ski in many of the 100,000 lakes. Hike trails through the Great Sand Hills where the desert-like dunes shift in the breeze. Watch the endless trails for wildlife from tiny chickadees to mega-sized moose. Rich in cultural history, take a step back in time to learn about the legendary Metis and First Nation of the region. 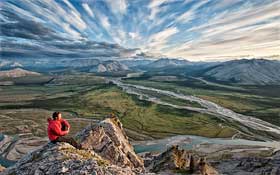 The compact, triangular Yukon territory in Canada’s northwestern corner is a diverse and easily accessible year-round natural and cultural treasure. Follow historic travel routes and marvel at wilderness where thousands of caribou still migrate annually. Experience world-class road trips on well maintained highways and off the beaten path; even across the Arctic Circle all the way to the Arctic Ocean  Cheer on cancan dancers and stroll the wooden boardwalks of Dawson City, the heritage Klondike Gold Rush outpost where you can still pan for gold nuggets. Spot Dall sheep and grizzly bears while wildlife viewing in Kluane National Park and Reserve Learn about First Nations culture at several visitor centres throughout the Yukon.

Contact our expert tavel consultants for a customised experience

Find Us On Social Networks

We Are Located at